Reality has always been dependent on our minds, senses and intuitions.

As technology advances, mankind isn’t only living within everyday reality, but is also creating another one of its own: Virtual Reality (VR).

When you have the power of creating reality, there are endless possibilities. It’s a new world of opportunities and applications. Entertainment, Networking, Education, and Communication are some of the avenues where VR is already making inroads. So let’s dive into the world of VR and learn about some of the latest VR statistics!

VR (Virtual Reality) is a realistic environment in 360º created through computer simulations. But what’s different in VR from a normal 3D interface? With the help of hardware such as VR Headsets, the user becomes a part of the VR environment and interacts within the VR through head and body motions.

VR first arose in Sci-Fi fiction literature. But taking it out of the books and into the market with unlimited application prospects is one giant leap that VR techies have taken.

This was made possible with the R&D investments by tech giants like Google, Meta, Sony, Microsoft and others. The huge interest from these companies and their plans regarding VR suggests that we are entering into a new era of technology.

This is reflected by VR device shipments by leading vendors, with Sony, Microsoft, HTC and Meta-owned Oculus leading the way. Between them, Sony and Meta corner over 60% of the device shipment market!

It took global companies and brands some time to realize the potential of VR. With the ever-growing market applications of VR, its market is now beginning to show some promise. 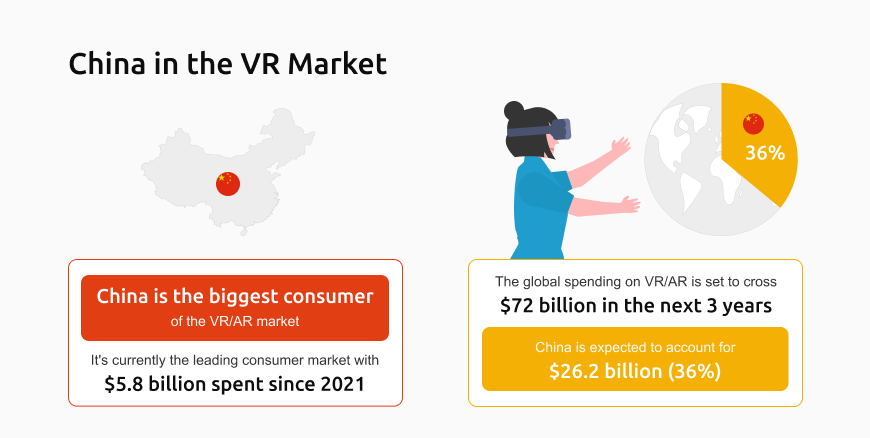 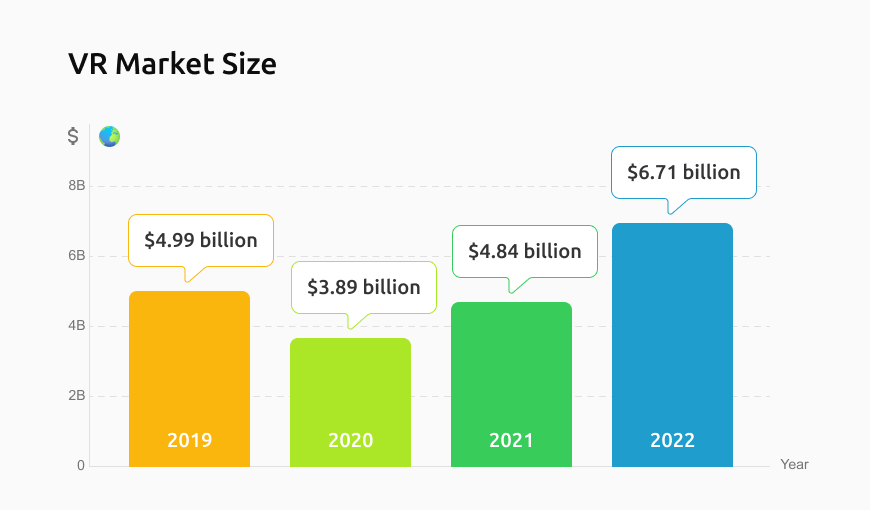 It’s a fact that the VR adoption has been slow from the end-user side. The reasons for this were obvious; even the best in the tech business including the leading tech companies were unsure about the wide-scale applicability of VR/AR.

There were restraints too that hindered the rapid market penetration of VR. A few of them were seamless user experiences due to connectivity problems and a lack of high-resolution VR experiences.

However, with more research and more funds being pumped into the VR sphere, the progress is now visible across the domestic market. The virtual reality statistics below present rather an expected picture of user adoption where consumers from the industrial world are the first to adopt VR products and services. 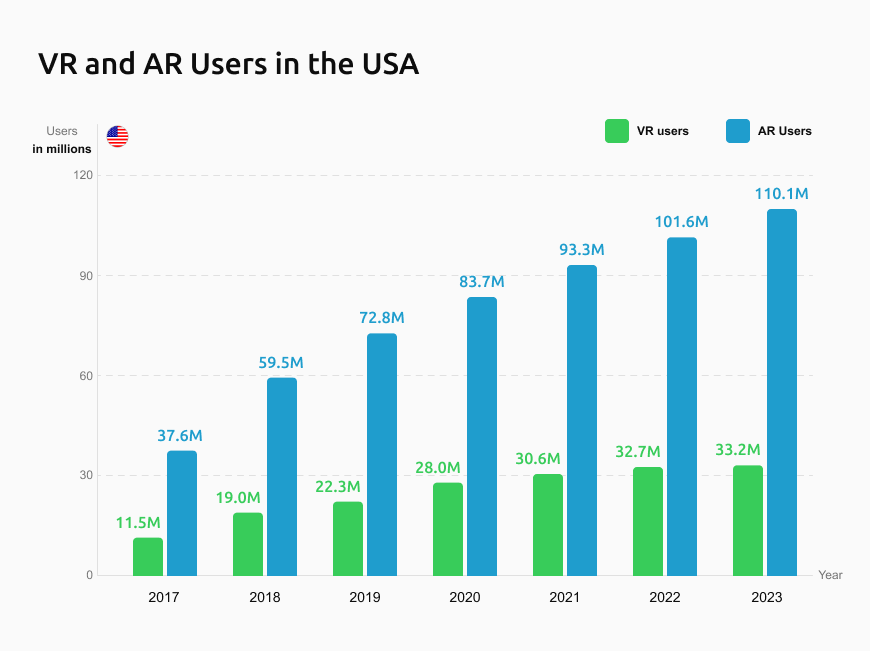 The gaming industry was one of the first to utilize VR’s potential. Gaming development companies are already utilizing the available tech to generate billions of dollars in revenue. This will obviously improve with the development of much better VR hardware and software.

5G incorporation will change the game; not only for the virtual reality gaming industry, but all other industries that aim to streamline their processes and make their infrastructure 5G compatible. This will enable them to provide their users with seamless VR experiences. For a clear picture of the current VR gaming market,  here are some of the latest VR gaming statistics. 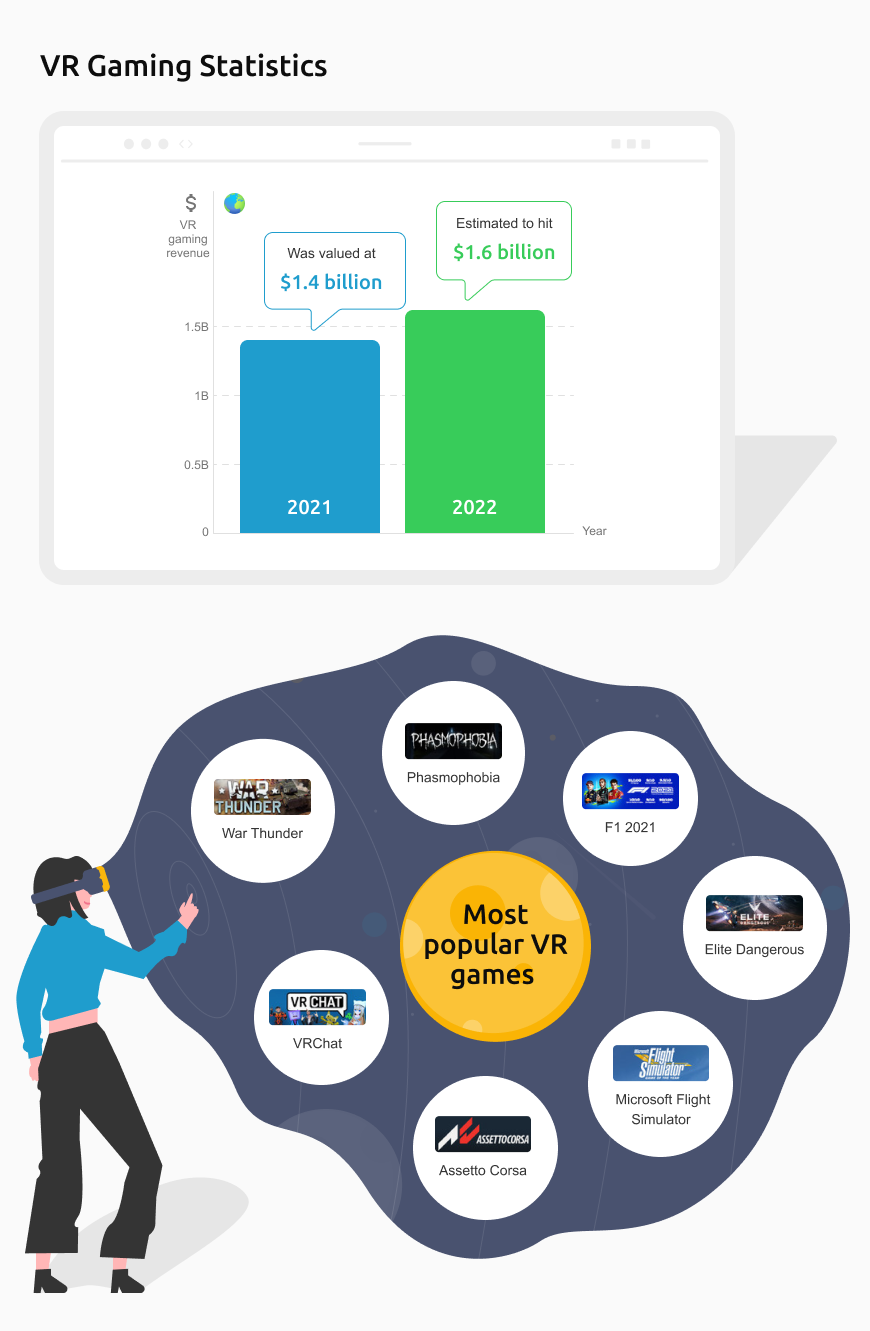 The idea of simulated experiences excites customers and users from all industries. Gaming, Education, Healthcare, Retail, Security, Manufacturing, and e-Commerce have already adopted VR as an important component of their operations. As a result, these industries of which VR impacts growth are the main investors in the VR sector.

Industry researchers believe that the upcoming implementation of the 5G technology and open MetaVerse are two of the main industries that will drive the exponential growth of VR technology. VR use cases might currently face hindrances due to interruptions in connectivity, resolution problems, and operational speeds, 5G will hopefully solve this problem.

On the other hand, as 5 billion people will be part of MetaVerse by 2030, VR will eventually become the main driving force behind this $13 Trillion market. 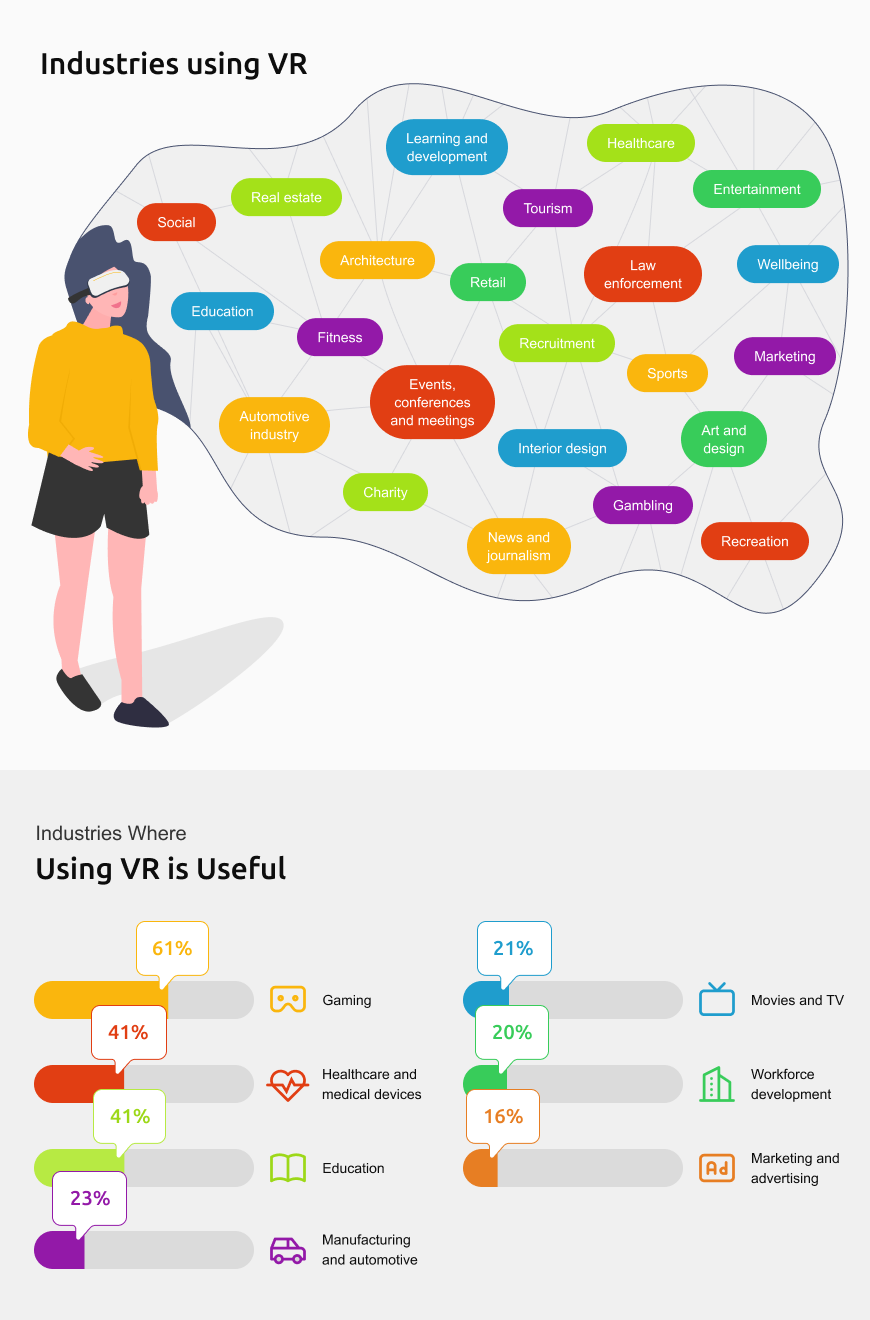 Challenges and Predictions in the VR Market

The key players in the VR global market today are technology manufacturing companies and other global tech/business giants. These companies are either producing VR products or platforms already, or they are using VR to improve the consumer experience.

Take the example of Alphabet Inc. Not only has it built the VR Headset brand named Oculus for high-resolution VR experiences, but it has also announced other state-of-the-art VR tools. Also, the MetaVerse itself is a VR-centric platform that allows users to build a whole new virtual world.

Overall, all the big names in the tech industry today, while making efforts to stay relevant to the VR world, are also playing their part in VR technology development.

Given the industrial interest in VR and AR-backed technologies, the future VR market is looking set to grow. Away from gaming, potentially over $5Bn will be invested into healthcare. Other big sectors are also looking likely to invest in VR-based technology, with major players in the education and military spheres both likely to invest around $1Bn into the VR market.

All of this wide-scale cross-industry adoption of the VR tech suggests that VR could easily outperform “reality” on many fronts already. As a result, predictions that VR is going to be the “mainstream reality” of the future do begin to make sense. 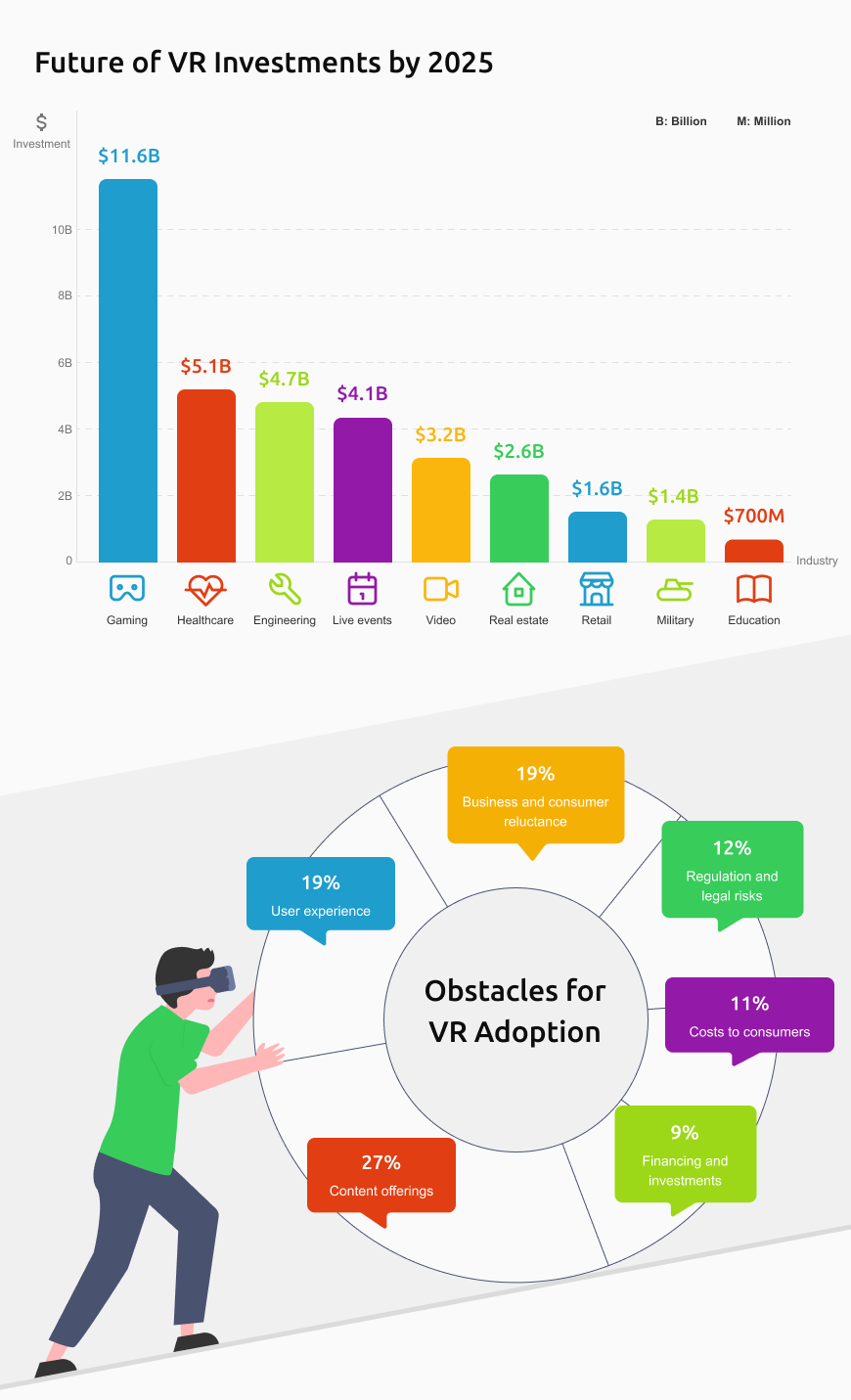 VR is futuristic and has the potential to disrupt the present global tech market. Moreover, the statistics above suggest that the future is now. The phase where the flame of VR burnt slowly for many years has passed. Backed by the biggest global tech companies, now is the time when VR blooms to its brightest days.

Although the main use cases of VR technology are in the gaming and entertainment industries, it’s about time that other industry lines such as e-Commerce, Consumer and Retail, Education, Medicine, and others, realize the potential of VR in modernizing their operations and maximizing their ROIs.

While most of the global business came to a halt during Covid-19, the VR Industry was one of the few businesses that grew. And now as the world is moving towards remote work and virtual work not by obligation, but by choice, the better days for the VR industry are around the corner. 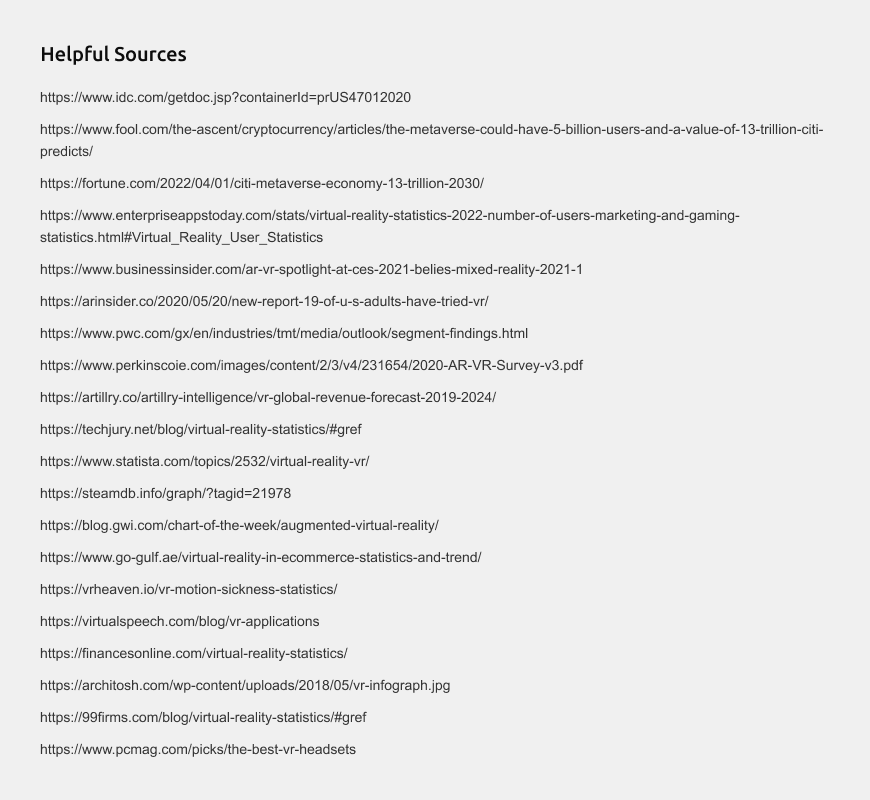